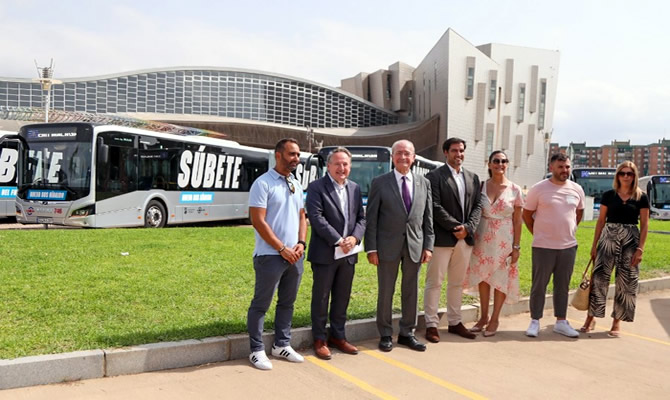 EMT bus subscriptions have been reduced by between 35 and 40 per cent by Malaga City Council.

Francisco de la Torre, the mayor of Malaga city, announced on Tuesday, August 9, the new prices of the passes and cards of the Empresa Malagueña de Transporte (EMT). They will be in force from September 1 to December 31 of this year, offering a discount of between 35 and 40 per cent of the current price.

This is a measure issued by the Ministry of Transport in Royal Decree Law 11/2022. It established a series of direct aid to municipal urban collective transport companies, such as the EMT, allowing them to reduce their rates by 30 per cent.

As Mr De la Torre pointed out, in the case of Malaga: “Not only do we make a 30 per cent reduction, but we also organise ourselves to achieve a reduction of 37 per cent or even 40 per cent in some subscriptions”.

Young people and students will also benefit, with the price of their current cards dropping from €27 per month to €17 per month. This represents a reduction of 37 per cent.

The mayor assured that this measure is not intended just for those who lack private vehicles, but also for “those who make a commitment to public transport as a contribution to a more sustainable, harmonic, less polluting, and more inclusive city for everybody”.

In line with continuing to contribute to reducing CO2 emissions in the city, the mayor has presented 12 new hybrid buses that will be incorporated into the EMT fleet this month. These new buses involve an investment of almost €6 million, which has been financed by the City Council.

According to a statement from the Council, these new buses consume 19 per cent less fuel and emit up to 98 per cent less polluting gases.

With this new incorporation, the EMT will have 37 buses with hybrid technology. This is part of the Council’s commitment to public transport as a “sustainable means of travel, with larger, innovative vehicles and hybrid technology. It will contribute to improving air quality and reducing emissions”. The new buses will run on lines 1, 3, 7, 8, 11, and 15.

These MAN brand units are 5 per cent larger than the standard size used in the manufacture of articulated buses, just like the last 25 units purchased. The bus measures 18.75 metres, almost one metre more than regular articulated buses. This contributes to improving the interior space allocation for passengers.

As with the ten buses purchased last year, they include a new design compared to the city’s previous fleet. They are made from new materials that allow greater optimisation of weight and performance. This results in more contained consumption and lower emissions, helping to improve the quality of air.