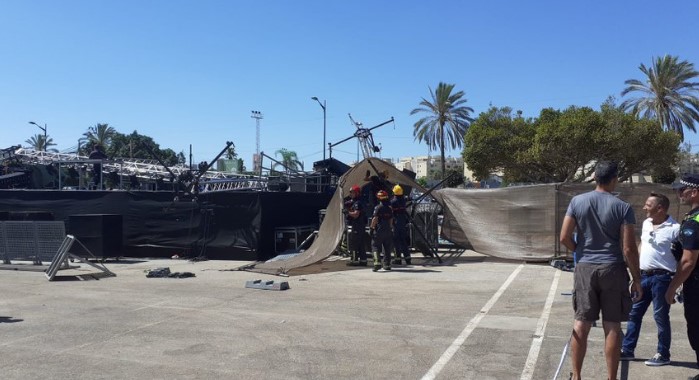 Performances in the Youth Area of Malaga fair are still suspended by Malaga Council until the lighting bridge is fixed.

Performances on the stage in the Youth Area of Malaga Fair can not recommence until the lighting bridge has been replaced safely. This was announced earlier today by Teresa Porras, the Malaga Councillor for Fiestas, during an interview on the Ser Malaga network.

The councillor said that the person in charge of setting up the stage in the Youth Area was “looking for a new bridge of lights as a replacement because the original one has been destroyed”.

She added that until the structure was fixed and passed safe for use, shows would not continue. Ms Porras suggested that the work might not be completed in time for tonight which means the scheduled artists could not perform, as reported by malagahoy.es.

As announced today, Monday, August 15, by Malaga City Council, performances in the Real Youth area at the Malaga Fair have been suspended after part of the stage collapsed. It is believed to have been a consequence of the strong gusts of wind that have affected the province overnight.

Posting on its official Twitter account, the Council explained that all concerts were cancelled, “until further notice”. They detailed that specifically, the part of the structure that has come down is the lighting bridge and the stage screen.

Luckily, the incident occurred at a time when there was no large influx of public in this area, which is usually full at night. Thanks to this, no personal injuries occurred.

Malaga firefighters were deployed to the site to inspect the structure, which, according to the City Council, had: “favourable technical reports and required permits”. An investigation will determine the exact cause of the collapse.

The 112 Andalucian Emergency Service received a call at around 4:30pm this afternoon, informing the operator of the incident. Local Police officers subsequently cordoned the area off to the public.